About Relative vs. Absolute Grading

Sometimes, students will email me about their grade, asking how it is possible they got a C+ in a course when the size of the course is “too small to require Relative Grading.”

There are three mistakes in that assumption: 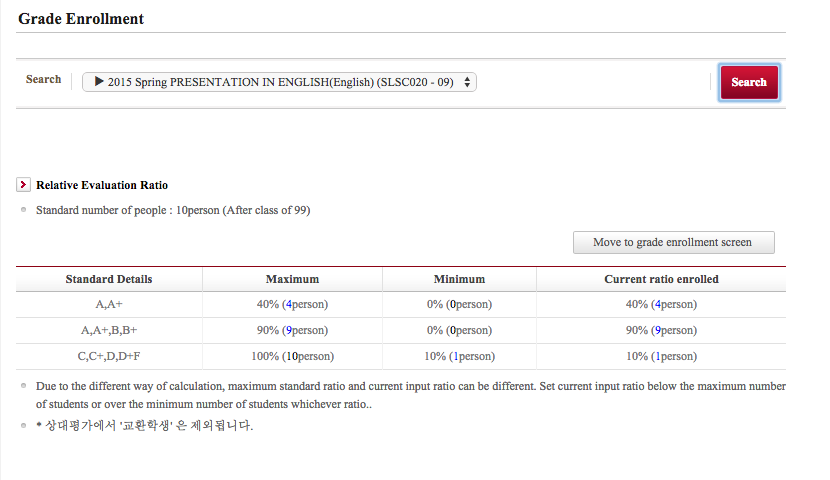 Here’s a fun fact for you:

I almost never have to worry about the Relative Grading System. This system was created for one reason alone: because some professors have a bad habit of “inflating” grades. Grade inflation is a complex problem, but it’s generally agreed (and I believe) that it lowers academic standards and is bad for students and universities. The South Korean Ministry of Education agrees, and most South Korean Universities have rules about grade inflation (and relative grading requirements) for this reason.

It does happen that sometimes I have to give a C+ to someone who deserves or earned a B. But it is very, very rare, and it is better to assume you didn’t get a B because you didn’t earn it. When you inquire about grade results, start with the assumption that you got the grade you earned, because as your professor, I spend a lot of time designing the course and homework, evaluating your work, and calculating your final score, in a way that fairly reflects your work.

(In other words, I rarely make mistakes, so don’t assume I have.)

For more advice on grades and homework, I suggest you see the following two advice pages:

"For the correct analogy for the mind is not a vessel that needs filling, but wood that needs igniting..."      —Plutarch, "On Listening," Moralia