This is a bit late, but since nobody emailed me asking, I hope you all found what I was talking about.

I mentioned Bobby Lee’s Korean soap opera series (this is part 1, out of 4 parts — if you click through to Youtube you can see videos for the others in the sidebar):

… and I mentioned, for Chinese students, the racially-caricatured character “Short Round” in the film Indiana Jones and the Temple of Doom. I mean this kid: 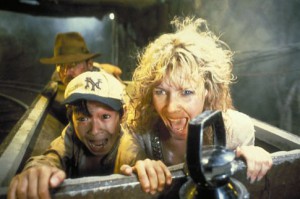 I suggested I would try to post a copy of the song I showed you in class, Berta Berta. here it is:

Here’s the scene in the film adaptation of the play The Piano where the song Berta Berta was performed, leading to its “repopularization.” If I had a copy of this movie, I’d definitely show it to you, but I don’t have one, unfortunately. If you can find a copy, let me know… it’s phenomenal for talking about some of the issues I’ve been trying to get you to talk about.

By the way, if you have a really strong stomach, and want more of an experience of seeing harsh caricature of Koreans–a tiny bit more of a sense of how it feels for an African-American seeing blackface performance, the Korea History Channel videos (like this one) are maybe a harsher example. I’m not recommending those videos as fun, though if I remember right, one of those guys is Korean-American. (I could be wrong but I thought I read that somewhere… does that make it better?)

One more: what do you make of this video–the intergenerational tension between immigrant father (sounds Cantonese) and his son, who is “acting too black”?

Comments are closed.
"For the correct analogy for the mind is not a vessel that needs filling, but wood that needs igniting..."      —Plutarch, "On Listening," Moralia